It’s Thanksgiving weekend, so Scott and I aren’t able to sit down and record a special episode on the US presidential debate that happened last night. So while we will get to much of this on this week’s episode (assuming more news doesn’t drop and I’ll get to that later), having just watched it, I wanted to give my immediate reactions (filtered through some of the analysis I’ve already read).

First though, I want to start by saying how thankful I am for choosing to watch the Blue Jays complete the sweep of the Texas Rangers in the ALDS last night. It was a fantastic and nail-biting finish, something I can’t say about the debate.

Going into this debate, many commentators were calling it potentially the worst week of Donald Trump’s campaign: His horrible first debate performance, the leak of his 1996 tax returns, his late-night Twitter rants, the leak of his bragging about sexually assaulting women and defections by numerous high profile Republicans. Simply put, he needed a miraculous performance to have any realistic chance at salvaging his campaign.

And I want to emphasize this for a moment.

Until now, Trump has gone from scandal to scandal, saying things that would destroy the careers of any typical politician, and simply falling upward. Yet something’s finally changed and the sleaze is starting to stick.

So while over the entirety of this debate, Trump managed to remain relatively composed and temperate – he even managed to land some of his attacks – I have a really hard time seeing it as enough to stop the bleed.

In the first debate, the bar was set so low for Trump that he just had to step over it to not fail (he didn’t). In this debate, the same low bar has now been for Clinton’s path to victory. It’s getting to the point where Clinton wins by default by being a living, breathing human.

On fitness for president 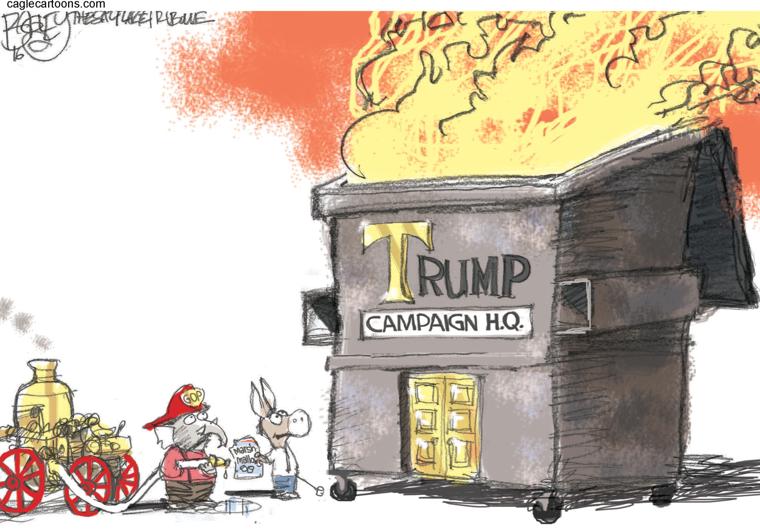 We didn’t see Trump degrade in this debate the way he did in the first. Part of this, I think, is simply due to the format that put most of the interactions between the candidates and the moderators rather than between the two candidates. The other part, and I’ll delve into this at the end, is that perhaps Clinton’s strategy was simply to stay out of the way of the ongoing dumpster fire that has become the Trump campaign.

That said, Trump did lose his temper a few times in the debate. Most notably near the end when Anderson Cooper probed him, ironically, on whether someone who goes off on late night Twitter rants is fit to be president.

Trump, feeling such a slight to his ego and temperate, chose to, again, demonstrate this by going off on an angry tirade. In this case, he tried to clarify the specific words he Tweeted about Alicia Machado’s supposed sex-tapes, bragged about the 25 million followers he has on Twitter and Facebook, and pointed out that Hillary tweeted late at night too (not realizing she most likely has a team behind her account).

Similarly, Cooper pressed Trump on whether he would concede that his, now infamous, 2005 comments constituted sexual assault (and full props to Cooper for that) and that he was admitting to assaulting women. Trump responded by continually referring to it as mere “locker room talk” before pivoting sharply to the need to fight ISIS. Ironically he even said he respects women the most. He also brought up women who have accused Bill Clinton of sexual assault (he held a news conference with them hours before the debate and brought them to the audience) and how Hillary had attacked them.

Clinton meanwhile, tried to set herself apart by talking about values of diversity and pointing out how Trump had not apologized for his similarly disgusting comments about Mexicans, Muslims, people with disabilities and others.

In another exchange over Clinton’s emails, Trump went into his full disruptive attack mode. While she was trying to defend herself and her record, he continually interrupted her and the moderators who tried to stop him, until she effectively gave up. Beyond that, Trump brought up the idea that, as president, he’d appoint a special prosecutor to put Clinton in jail.

While Clinton smiled through this absurd and totalitarian suggestion, she missed any return attack on this. On several occasions when Trump attacked, Clinton’s responses seemed almost muted or dangerously smug. Perhaps she’s confident in her position in the campaign (and she has every reason to) but I could see those smiles, even if only to conceal an inner horror at Trump’s comments, working against her.

Trump clearly thought he had an angle on Clinton along this line as he brought up Bernie Sanders’ comment that she has bad judgement at least three times. He’s likely still also hoping (probably in vain at this point) to win disaffected Bernie bros to his side. Those are the same voters who are worried about the email scandal and Clinton needs a stronger rebuke here.

Finally, despite all of this, what actually might sting Trump the most in his own adopted quarters of the Republican Party, was his denunciation of his running mates foreign policy statements. When questioned on Mike Pence’s statements that the USA needed to take a strong stance and challenge Russia and Syria’s Bashar al-Assad, Trump said he hadn’t spoken to his VP pick on the issue and “we disagree.”

While it’s been widely described as Trump throwing Pence under the bus, I’d argue it’s even bigger than that.

There are differences between the Republicans and Democrats on foreign policy but for the most part they have agreed about who the enemies are and whether action needs to be taken. The disagreements come down to levels of involvement and the exact balance between diplomacy and aggression.

Yet Trump has struck out on a radically different course throughout his campaign and it comes to a head when he says he disagrees with and hasn’t even talked to the person he supposedly chose to be his second-in-command.

On the foreign policy front, Clinton repeatedly brought up Russia and the suggestion that the Kremlin was working to influence the outcome of the election (possibly through Wikileaks), and that Putin didn’t want her to win. It was something Trump, again, didn’t outright deny but merely suggested that, while he “didn’t know Russia, it would be great if we got along.” And he questioned whether the Syrian rebels (that is, those who started an uprising against a corrupt and dictatorial regime in favour of a secular, liberal democracy) were worse than Assad.

As I discussed in our preview episode, I have problems with the simplistic nature of the question of “who won” as it seems inevitably graded on a curve. That said, most polls agree with my take that Clinton won.

And under the analysis I tried to set out, that is who objectively performed better, it was easily Clinton. She appeared more presidential, more steady and more informed on the issues. I think her strongest point in the debate was actually on tax reforms, challenging Trumps claims that cutting taxes for the wealthy would benefit the middle class. She also presented her 30 year record in office stronger than she has previously, discussing specific measures she’d enacted.

Trump was definitely more prepared for this debate than the first, and clearly had a few specific points he wanted to bring in, but Clinton was again more polished and didn’t stumble like she did in the first debate – even when she had the perfect opportunity to say Trumped-up-trickle-down economics again.

But this all plays into a theory I’ve been thinking about during this election.

It’s been well documented, and Trump even concedes, that Clinton’s campaign is much better funded than his. This has been the case for months and has undoubtedly taken off over the past two months. This funding gap means that the Clinton campaign can afford the best strategists and spend as much as it chooses to, when it chooses to.

It’s also well aware that the election is not until November 8.

So while Clinton got a healthy poll bump after the media focus of the Democratic National Convention, I believe that her campaign purposefully remained muted over the following weeks. They spent August and September fundraising and collecting any last bits of evidence they’d need.They also spent it preparing Clinton for the final push.

The turning point was then planned for and executed at the first debate. That was the first opportunity for the American public to directly compare and contrast Clinton and Trump as candidates side by side.

At this point, Clinton’s advisors had poured over every bit of footage they had of Trump and psychoanalyzed all the evidence to develop a strategy for her to needle him and knock him off balance in that first debate. And it worked. Whether on his personal business dealings, loans from his father, his past racist business practices, his tax returns or his comments about women, Clinton egged Trump into a furious rage on every issue in that first debate.

It then set off two weeks of hell for the Trump campaign as leak after leak came out.

Each of which, I’d argue, was either organized by the Clinton campaign, they were aware of in advance, or they at very least they had the staff to capitalize on in a way that Trump’s campaign just couldn’t.

This brings us into last night’s debate where Clinton is riding a renewed wave of support, approaching the height of her post-convention bounce, and all at a time when advance polls are starting to open. To win, as I mentioned, she merely needed to stay competent.

There’s an adage that politicians should keep away when their opponents are self-destructing. The temptation is to drive the knife in or salt the wounds of your rivals, but there’s a lot of risk to such a strategy. Getting dirty with Trump is bound to end up badly, so for the most part Clinton let Trump do damage to himself. She interrupted just once and generally pivoted quickly from denouncing his lies to speaking about her own values and positions. It was the moderators, notably the esteemed Anderson Cooper, who spent the most time challenging Trump.

So now we’re still almost a month away from election day. Over the next month, I expect more leaks, more prominent Republicans distancing themselves from Trump and a continued push by the Clinton campaign to run Trump, and arguably the Republican Party, into the ground.

Or, at least, that’s what I really hope happens.

Background in physics, works in non-profit, an excess of opinions.